Book Beginnings is hosted by Rose City Reader. The weekly post goes up every Thursday and bloggers can add their links all week. 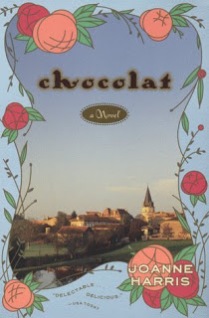 My book this week is Chocolat by Joanne Harris. This is a reread for me. The beginning:
February 11
Shrove Tuesday
We came on the wind of the carnival. A warm wind for February, laden with the hot greasy scents of frying pancakes and sausages and powdery-sweet waffles cooked on the hot plate right there by the roadside, with the confetti sleeting down collars and cuffs and rolling in the gutters like an idiot antidote to winter. There is a febrile excitement in the crowds that line the narrow main street, necks craning to catch sight of the crêpe-covered char with its trailing ribbons and paper rosettes. Anouk watches, eyes wide, a yellow ribbon in one hand and a toy trumpet in the other, from between a shopping basket and a sad brown dog. We have seen carnivals before, she and I; a procession of two hundred and fifty of the decorated chars in Paris last Mardi Gras, a hundred and eighty in New York, two dozen marching bands in Vienna, clowns on stilts, the Grosses Tetes with their lolling papier-mâché heads, drum majorettes with batons spinning and sparkling. But at six the world retains a special luster. A wooden cart, hastily decorated with gilt and crêpe and scenes from fairy tales. A dragon’s head on a shield, Rapunzel in a woolen wig, a mermaid with a cellophane tail, a gingerbread house all icing and gilded cardboard, a witch in the doorway, waggling extravagant green fingernails at a group of silent children… At six it is possible to perceive subtleties that a year later are already out of reach. Behind the papier-mâché, the icing, the plastic, she can still see the real witch, the real magic. She looks up at me, her eyes, which are the blue-green of Earth seen from a great height, shining.

This post is also for this week’s Friday 56. Here is a bit from page 56 (Pere Reynaud

‘s pov) :
Her eyebrows are perfectly straight, giving her a stern look belied by the comic twist to her mouth. Hands square and functional; nails clipped short. She wears n makeup, and yet there is something slightly indecent abut that face. Perhaps it is the directness of her look, the way her eyes linger appraisingly, that permanent crease of irony about the mouth. And she is tall, too tall for a woman, my own height. She stares at me eye to eye, with thrown-back shoulders and defiant chin. She wears a long, flared, flame-colored skirt and a tight black sweater. This coloring looks dangerous, like a snake or a stinging insect, a warning to enemies.