The third annual Wyrd & Wonder event, celebrating fantasy in May, is almost here!

This is my second time participating. These are the books I plan to read & review. I might write a discussion post too, I haven’t decided yet…

I loved this when I read it years ago! I’m really looking forward to reading it again. I’ll review it, but before that, I plan to post when I’m halfway through. That post probably won’t be spoiler-free, but the review will. In the meantime, Jo Walton’s review from 2009 is great:
Saleem Sinai, the first person narrator of Midnight’s Children (Random House), was born in the very moment of India’s independence in 1947. The conceit of the book is that he, and other children born in that first hour, have astonishing magical superheroic powers. The story is bound up with Indian independence, not just after 1947 but before—the story of how Saleem’s parents meet is one of the best bits—and how Saleem’s telepathic powers are at first a blessing and later a curse.

What makes it great is the immense enthusiasm of the story and the language in which it is written. It isn’t Rushdie’s first novel, that would be the odd and openly science fictional Grimus. But it has the kind of energy and vitality that a lot of first novels have…

A Buddy Read: The City of Brass (The Daevabad Trilogy, #1) 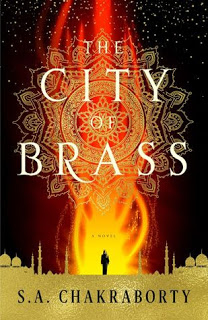 Nahri has never believed in magic. Certainly, she has power; on the streets of 18th century Cairo, she’s a con woman of unsurpassed talent. But she knows better than anyone that the trade she uses to get by—palm readings, zars, healings—are all tricks, sleights of hand, learned skills; a means to the delightful end of swindling Ottoman nobles.

But when Nahri accidentally summons an equally sly, darkly mysterious djinn warrior to her side during one of her cons, she’s forced to accept that the magical world she thought only existed in childhood stories is real. For the warrior tells her a new tale: across hot, windswept sands teeming with creatures of fire, and rivers where the mythical marid sleep; past ruins of once-magnificent human metropolises, and mountains where the circling hawks are not what they seem, lies Daevabad, the legendary city of brass, a city to which Nahri is irrevocably bound.
In that city, behind gilded brass walls laced with enchantments, behind the six gates of the six djinn tribes, old resentments are simmering. And when Nahri decides to enter this world, she learns that true power is fierce and brutal. That magic cannot shield her from the dangerous web of court politics. That even the cleverest of schemes can have deadly consequences.
After all, there is a reason they say be careful what you wish for…
Kriti @ Armed With a Book and Alex at Spells and Spaceships are hosting a read-along for this book. I hope it works for me as an audiobook because that is the only way I can get it from the library right now (from the service Hoopla Digital).
A Nonfiction Book: The Sandman Companion 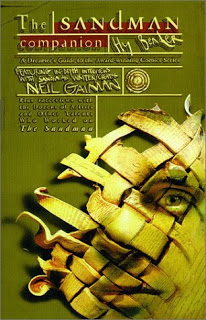 The Sandman was a groundbreaking and award-winning series that told the dark and tragic tale of Morpheus, the King of Dreams. A fascinating mythology of horror and consequence, this epic masterfully combined intriguing literature with captivating art. THE SANDMAN COMPANION is an exhaustive guide to this legend. Revealing hitherto undisclosed information and behind-the-scenes secrets, this book features in-depth interviews, never-before-seen illustrations, character origins, and story explanations and analysis. Also including excerpts from the original proposal for the series, this handbook is the perfect complement to the Sandman graphic novels. (description from GoodReads)

I really want to read more nonfiction books about fantasy. This is probably the only one I can fit in this month, though. 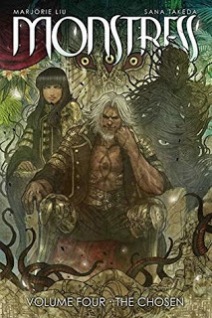 Maika and Corvin make their way through a warped and lethal land in search of Kippa, who is faced with her own terrible monsters. But when Maika comes face-to-face with a stranger from her deep past, startling truths are uncovered, and at the center of it all lurks a dangerous conspiracy that threatens the Known World. Maika is finally close to getting all the answers she ever wanted, but at what price? With war on the horizon-a war no one wants to stop-whose side will Maika choose? Collects MONSTRESS #19-24. (description from GoodReads)
I have mixed feelings about the series so far, as the exposition can be a bit difficult to follow, but I think I want to try this one anyway.
A Book With A Film Adaptation: Chocolat

When the exotic stranger Vianne Rocher arrives in the old French village of Lansquenet and opens a chocolate boutique called “La Celeste Praline” directly across the square from the church, Father Reynaud identifies her as a serious danger to his flock. It is the beginning of Lent: the traditional season of self-denial. The priest says she’ll be out of business by Easter.

To make matters worse, Vianne does not go to church and has a penchant for superstition. Like her mother, she can read Tarot cards. But she begins to win over customers with her smiles, her intuition for everyone’s favorites, and her delightful confections. Her shop provides a place, too, for secrets to be whispered, grievances aired. She begins to shake up the rigid morality of the community. Vianne’s plans for an Easter Chocolate Festival divide the whole community. Can the solemnity of the Church compare with the pagan passion of a chocolate éclair?

For the first time, here is a novel in which chocolate enjoys its true importance, emerging as an agent of transformation. Rich, clever, and mischievous, reminiscent of a folk tale or fable, this is a triumphant read with a memorable character at its heart.

I’ve read this before, but I didn’t get around to seeing the film then. I want to watch it sometime in May.