Jason and his Argonauts meet King Aeëtes to claim the Golden Fleece, which Ovid says he had stolen. Aeëtes will not give it up unless Jason meets his terms, performing great tasks for him. The king’s daughter, Medea, falls in love with Jason. She decides to help him fulfill the tasks that Aeëtes has demanded in exchange for the Golden Fleece, if he will marry her, and Jason agrees. First, he tames dangerous bulls with herbs given to him by Medea, and the bulls draw a plow for him. Second, he sows serpent’s teeth in the newly plowed land, and the teeth become mighty warriors. Medea sees Jason facing the warriors and works magic to give him good luck, and Jason throws a rock into the center of the assembled army, so that the warriors turn on each other, leaving Jason alone. Third, Jason must face the dragon who guards the Golden Fleece. Jason puts the dragon to sleep with juices from herbs, and sails home with his bride Medea and his crew. At home, he finds his father growing old and close to death, and asks Medea to use her arts to prolong his father’s life. On the night of the the full moon, Medea goes into the forest to pray to Hecate.

O Hecate, who answered my last prayer
To still the smoking breath of fiery bulls,
And tamed the beasts who never ploughed a field,
And spurred wild warriors of the serpent’s teeth
To fall in their own blood, who charmed the Sleepless
Guardian of the Golden Treasures when Jason took
That famous shield to Greece, now, I need more,
A magic, potent drink that dissipates
Old age and fills old veins with manly blood —
Nor shall you fail me; even the distant stars
Have bowed their shining heads at my command,
And here’s my chariot with its winged dragons.
For nine days and nights Medea collects magic herbs, including mosses that will later change Glaucus the fisherman into a sea god. Foreshadowing! I can tell from the table of contents that this refers to a story in Book XIV. Medea makes two altars out of mounds of earth, one for Hecate and one for Youth. She sacrifices a black sheep to Hades and Dis (Persephone) to extend the life of Jason’s dying father, Aeson. She purifies his body with fire, water, and sulfur, three times each. She boils herbs, precious stones, animal parts and other nameless things together in a pot. Then she cuts the old man’s throat to pour the brew into him, and he is restored to youth.
She pretends to quarrel with Jason and offers her services to another king, Pelias. She tricks him by sacrificing an old, sick sheep as part of the ritual, and using herbs that have no power. The daughters of Pelias, who were supposed to assist her, close their eyes when they are supposed to cut their father’s throat, and strike blindly at him instead. Medea slits the old man’s throat and throws his remains into the boiling pot. She flees, finding Jason in Corinth, where he has remarried. She kills his new wife, sets fire to his halls and kills their children. Before Jason can take revenge on her, Medea escapes and is welcomed by King Aegeus of Athens. She marries him. Theseus, the son of Aegeus, arrives in disguise. She attempts to poison him, but his father dashes the cup from his son’s lips. Medea vanishes in a cloud.
The Myrmidons

I could not find a good picture for this tale (maybe I will add one later) but I included it because it tells of the ancestors of Achilles. Ovid relates how Jove fell in love with a nymph and named the island of Aegina after her. In revenge, Juno sends a plague to the island, killing many people, and King Aeacus of Aegina prays to Jove to ask him to repopulate Aegina. Jove answers by sending thunder and lightning, which Aeacus takes as a sign from the gods. He sees a colony of ants on the trunk of a great oak tree and asks for as many people to fill his cities as there are ants. That night, Aeacus has a dream in which the oak tree shudders and the ants turn into humans, who settle in the deserted parts of the island. He calls them Myrmidons, and says that they are hardworking, thrifty, and honest, just like the creatures they were before.

Erysichthon
This is probably my favorite story in Book VIII. I had expected to like Dedalus and Icarus more because I was previously familiar with it. But no, the highlight has to be this one: Erysichthon,  king of Thessaly, chops down the sacred oak tree of the goddess Ceres in order to build himself a feast hall. The angry goddess curses him with insatiable hunger, which drives him to exhaust all his wealth to satisfy his hunger, up to and including selling his daughter for food.

But when her father learned she had the gift
Of being anything she wished to be
He set her up for sale to many a man
And sold her as a mare, a cow, a bird,

Over at the GoodReads group I am reading along with, Ovid’s Metamorphoses and Further Metamorphoses, commenter Desirae has posted an analysis of how hunger is a driving force in the other stories in book 8, which provides a common thread throughout the stories that I had not noticed.

I am reminded of the legend of Midas and the golden touch, which also appears in Metamorphoses, but it must be later on because I haven’t read it yet. I shouldn’t get too far ahead of myself. 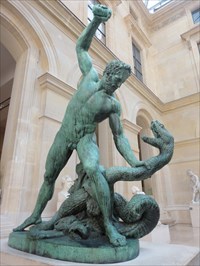 Achelous, a god of rivers, tells Theseus the story of how he lost his horn in a fight with Hercules. He and Hercules both had asked the father of Deianera for the girl’s hand in marriage. Achelous attempted to persuade the father that he was a better choice, provoking Hercules to challenge him to a fight: My hands make better speeches than my tongue. Go try to win a battle with your talk!

Achelous turned himself into a serpent, but Hercules nearly strangled him, so he turned into a bull. Heracles tore off one of his horns and forced the god to surrender. The Naiads fund it and filled it with fruits and flowers, and it became a sacred cornucopia for a goddess.

I wasn’t a big fan of book IX, but Orpheus & Eurydice is the next story! Looking forward to it.