The Spy Who Came in from the Cold is not on here, because I will probably finish it in a few days. 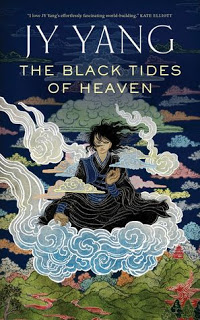 The Black Tides of Heaven is one of a pair of standalone introductions to JY Yang’s Tensorate Series. For more of the story you can read its twin novella The Red Threads of Fortune

Mokoya and Akeha, the twin children of the Protector, were sold to the Grand Monastery as children. While Mokoya developed her strange prophetic gift, Akeha was always the one who could see the strings that moved adults to action. While his sister received visions of what would be, Akeha realized what could be. What’s more, he saw the sickness at the heart of his mother’s Protectorate.

A rebellion is growing. The Machinists discover new levers to move the world every day, while the Tensors fight to put them down and preserve the power of the state. Unwilling to continue to play a pawn in his mother’s twisted schemes, Akeha leaves the Tensorate behind and falls in with the rebels. But every step Akeha takes towards the Machinists is a step away from his sister Mokoya. Can Akeha find peace without shattering the bond he shares with his twin sister?

4. Citizen (checked out from the library) by Claudia Rankine 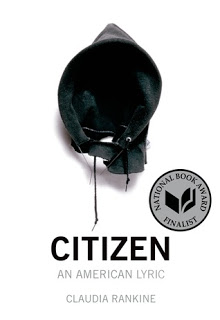 A provocative meditation on race, Claudia Rankine’s long-awaited follow up to her groundbreaking book Don’t Let Me Be Lonely: An American Lyric.

Claudia Rankine’s bold new book recounts mounting racial aggressions in ongoing encounters in twenty-first-century daily life and in the media. Some of these encounters are slights, seeming slips of the tongue, and some are intentional offensives in the classroom, at the supermarket, at home, on the tennis court with Serena Williams and the soccer field with Zinedine Zidane, online, on TV-everywhere, all the time. The accumulative stresses come to bear on a person’s ability to speak, perform, and stay alive. Our addressability is tied to the state of our belonging, Rankine argues, as are our assumptions and expectations of citizenship. In essay, image, and poetry, Citizen is a powerful testament to the individual and collective effects of racism in our contemporary, often named “post-race” society.
National Book Critics Circle Award for Poetry (2014).

3. A Vindication of the Rights of Woman by Mary Wollstonecraft (readalong with Ruth in April)

Writing in an age when the call for the rights of man had brought revolution to America and France, Mary Wollstonecraft produced her own declaration of female independence in 1792. Passionate and forthright, A Vindication of the Rights of Woman attacked the prevailing view of docile, decorative femininity, and instead laid out the principles of emancipation: an equal education for girls and boys, an end to prejudice, and for women to become defined by their profession, not their partner. Mary Wollstonecraft’s work was received with a mixture of admiration and outrage – Walpole called her ‘a hyena in petticoats’ – yet it established her as the mother of modern feminism.

4.  The Hitchhikers Guide to the Galaxy (reread) planned for Deweys 24 hour Readathon in April

Seconds before the Earth is demolished to make way for a galactic freeway, Arthur Dent is plucked off the planet by his friend Ford Prefect, a researcher for the revised edition of the The Hitch Hiker’s Guide to the Galaxy who, for the last fifteen years, has been posing as an out of work actor.

Together this dynamic pair begin their journey through space aided by quotes from The Hitch Hiker’s Guide “A towel is about the most massively useful thing an interstellar hitchhiker can have” and a galaxy-full of fellow travellers: Zaphod Beeblebrox – the two-headed, three-armed ex-hippie and totally out to lunch president of the galaxy; Trillian, Zaphod’s girlfriend (formally Tricia McMillan), whom Arthur tried to pick up at a cocktail party once upon a time zone; Marvin, a paranoid, brilliant and chronically depressed robot; Veet Voojagig, a former graduate student who is obsessed with the disappearance of all the ball-point pens he has bought over the years.

As You Like It is a pastoral comedy by William Shakespeare believed to have been written in 1599 or early 1600 and first published in the First Folio, 1623. The play’s first performance is uncertain, though a performance at Wilton House in 1603 has been suggested as a possibility. As You Like It follows its heroine Rosalind as she flees persecution in her uncle’s court, accompanied by her cousin Celia and Touchstone the court jester, to find safety and, eventually, love, in the Forest of Arden.

I am not sure yet what edition I will read.

6. The Left Hand of Darkness by Ursula LeGuin — This will be a group read in one of my GoodReads groups, so I hope to read it in April, or maybe in May. This is one of my favorite science fiction novels. I have read it twice. (library) 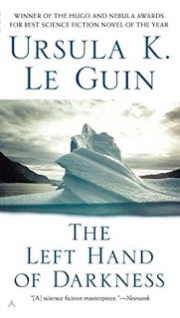 A groundbreaking work of science fiction, The Left Hand of Darkness tells the story of a lone human emissary to Winter, an alien world whose inhabitants can choose -and change – their gender. His goal is to facilitate Winter’s inclusion in a growing intergalactic civilization. But to do so he must bridge the gulf between his own views and those of the completely dissimilar culture that he encounters.

Embracing the aspects of psychology, society, and human emotion on an alien world, The Left Hand of Darkness stands as a landmark achievement in the annals of intellectual science fiction.

Part fact, part fiction, Tyehimba Jess’s much anticipated second book weaves sonnet, song, and narrative to examine the lives of mostly unrecorded African American performers directly before and after the Civil War up to World War I. Olio is an effort to understand how they met, resisted, complicated, co-opted, and sometimes defeated attempts to minstrelize them.

8. Metamorphoses — I started this in January. I think I will finish in May. 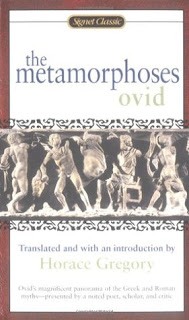 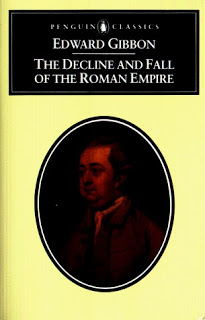 Ruth @ A Great Book Study is reading this and I am trying to catch up. She will probably finish it first.

In the two centuries since its completion, Gibbon’s magnum opus — which encompasses some 1,300 years as it swings across Europe, North Africa, and Asia — has refused to go the way of many ‘classics’ and grow musty on the shelves. ‘Gibbon is a landmark and a signpost — a landmark of human achievement: and a signpost because the social convulsions of the Roman Empire as described by him sometimes prefigure and indicate convulsions which shake the whole world today, ‘ wrote E.M. Forster. Never far below the surface of the magnificent narrative lies the author’s wit and sweeping irony, exemplified by Gibbon’s famous definition of history as ‘little more than the register of the crimes, follies and misfortunes of mankind.’

10. One Hundred Years of Solitude by Gabriel Garcia Marquez for the Back to the Classics challenge (read a classic from Latin America) (library)

The brilliant, bestselling, landmark novel that tells the story of the Buendia family, and chronicles the irreconcilable conflict between the desire for solitude and the need for love—in rich, imaginative prose that has come to define an entire genre known as “magical realism.”

11. Stand on Zanzibar by John Brunner for the Back to the Classics challenge (read a classic more than 500 pages long). (library)

Norman Niblock House is a rising executive at General Technics, one of a few all-powerful corporations. His work is leading General Technics to the forefront of global domination, both in the marketplace and politically—it’s about to take over a country in Africa. Donald Hogan is his roommate, a seemingly sheepish bookworm. But Hogan is a spy, and he’s about to discover a breakthrough in genetic engineering that will change the world … and kill him. These two men’s lives weave through one of science fiction’s most praised novels. Written in a way that echoes John Dos Passos’ U.S.A. Trilogy, Stand on Zanzibar is a cross-section of a world overpopulated by the billions. Where society is squeezed into hive-living madness by god-like mega computers, mass-marketed psychedelic drugs, and mundane uses of genetic engineering. Though written in 1968, it speaks of 2010, and is frighteningly prescient and intensely powerful.