Cleo at Classical Carousel  read Metamorphoses in 2016, and wrote synopses for each book. I probably won’t do that, but I will pick at least one story from each book (of 15) to write about.

Some quotes I want to keep in mind from the Introduction by the translator, Horace Gregory:

“It is in the play of emotional extremes, the forces of illogical and conflicting impulses that Ovid offers the richness of psychological detail to the modern reader. His many heroines (and there are over fifty stories in The Metamorphoses) are set before us in dramatic moments of their indecision. Actually they do not meditate; they waver between extremes of right and wrong. They live and act within a world of irrational desires that are as vivid to them as things that happen in a dream…

To the reader of Ovid’s Heroides a Euripidean heritage was clear, and all the more charming because the situations of women were presented in new dress, in the form of letters written by women to their lovers. Beyond Euripides and for another age, Ovid had become the authority, the teacher, the guide on the behavior of women, their dilemmas, their weaknesses, their powers of attraction.

The subject of women, however wittily, however seriously Ovid treated it, was not unimportant in the transition from Republican to Imperial Rome. For among the changes that marked the new society that Augustus in his later years attempted to reform was the increasing prominence of women in public affairs. The change had begun in Cato’s day with the coming of Hellenic luxury into Rome. Women were given property rights, and Cato remarked that they had begun to rule the rulers of the world. Within a hundred years following Cato’s observation the elder austerities of  Roman family life had been swept away. In high circles women were no longer the custodians of domestic sexual morality. They became patronesses of the arts as well as of business and politics…“

I am not sure if I’ve heard of Ovid’s Heroides before. It is not as famous as Metamorphoses, but it sounds interesting!

Gregory describes the monologues of Ovid’s characters:
“The technique was both new and attractive, and through it one can see foreshadowings of the melodramatic monologues of Seneca’s tragedies, and through them, the soliloquies of Shakespeare. One can almost say that Ovid invented the passionate aside, the internal monologue of drama and fiction. Ovid, being the kind of poet he was, and concerned as he was with contradictory avowals and denials, seldom employed his internal monologues to advance philosophies. His purpose (and for this one need go no further than the many internal monologues of The Metamorphoses) was to reveal the conflicts of emotional situations.“

Invocation
Now I shall tell of things that change, new being
Out of old, since you, O Gods, created
Mutable arts and gifts, give me the voice
To tell the shifting story of the world
From its beginning to the present hour.

In Chaos and Creation, Ovid tells how the world was created out of Chaos.

The first millennium was the age of gold;
Then living creatures trusted one another;
People did well without the thought of ill;
nothing forbidden in a book of laws… 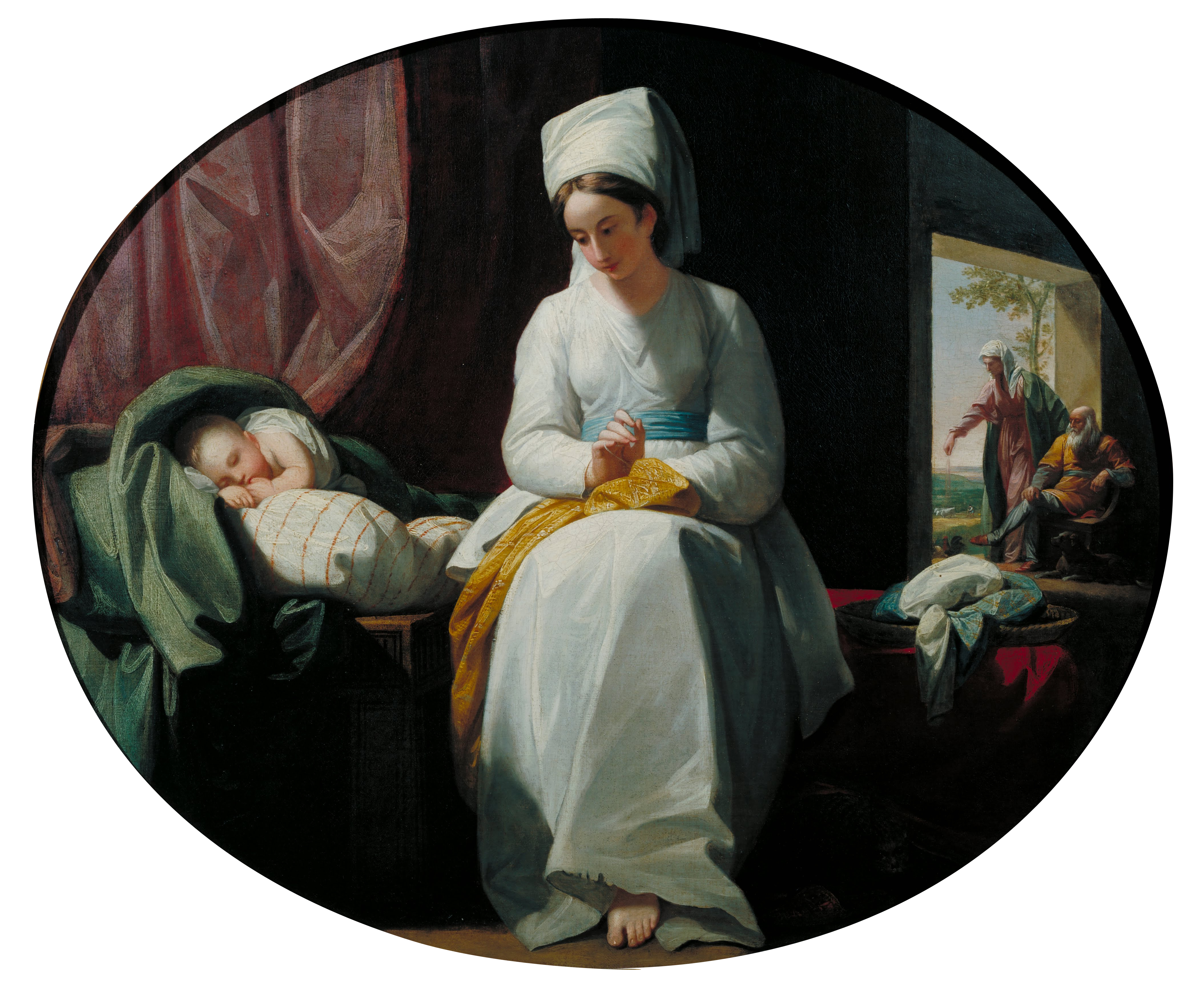 The Golden Age by Benjamin West

During the next age, the age of silver, the year is split up into the four seasons.

… shifty Autumn, wild winter, and short Spring,
Summer that glared with heat; the winter wind
Gleamed white with ice that streamed on field and river.

Then came the age of bronze, less soft than silver,
And men in bronze were quick with sword and spear,
Yet all feared Jove. Then came the age of iron
And from it poured the very blood of evil:
Piety, Faith, Love, and Truth changed to Deceit,
Violence, the Tricks of Trade, Usury, Profit…

People started to mine metals, and became corrupted by their new wealth:

All that drives men to avarice and murder
Shone in the dark; the loot was dragged to light
And War, inspired by the curse of iron and gold,
Lifted blood-clotted hands and marched the earth.

Later, in the story of Deucalion and Pyrrha, there is a great flood and life begins again.

The god Mercury wants to marry Herse, daughter of Crecrops (the mythical founder of Athens) and goes to her house to ask for her hand. He meets her sister Aglauros first, and Aglauros agrees to give Herse his message in exchange for gold. Minerva sees this conversation and goes to the cave where the goddess Envy resides. Minerva orders Envy to poison Aglauros. She wants revenge for Aglauros‘s defiance of her in an earlier tale (see “The Raven,“ which tells the story of Erichthonius). I selected this story because of the vivid personification of Envy:

Wars virgin stood aside, nor would she enter
That fouled dwelling, but clanged her  spear against
its sagging doors, which, swaying inward, showed
Envy at feast, eating great snakes and vipers,
A perfect diet for increase of venom…

… for Envy never
smiles unless she sees another’s misery;
Envy is sleepless, her heart anxiety,
And at the sight of any man’s success
She withers, is bitten, eats herself away.

Envy poisons Aglauros, placing a nest of thorns in her heart and giving her envious dreams of Mercury’s marriage to Herse. Aglauros decides to sit in the doorway to Herse’s room and refuses to move when Mercury arrives. Mercury turns her into a statue made of black rock.

Narcissus is the son of the river nymph Liriope. Liriope asks the prophet Tiresias whether her son will live a long life. Tiresias says: only if he never comes to know himself. When he is sixteen, both boys and girls are attracted to his good looks, but he proudly ignored them all, including the nymph Echo. Echo has been cursed by Juno, because Echo used to keep her in long conversations to distract her from catching Jove in his affairs with women. As a result of Juno’s curse, Echo can say nothing but the last few words that she heard from others. She keeps calling to Narcissus until only her voice is left. Narcissus falls in love with his reflection in a pool of water, and dies pining away for his own image. His body turns into the flower that becomes known as the Narcissus.

Pentheus, the king of Thebes, scorns the gods and does not believe Tiresias‘s prophecies. Tiresias warns him that a day will come when the god Bacchus, the son of Jove and Semele, will rule the earth, and if Pentheus does not honor him he will be torn to pieces. When Bacchus (also called Liber) arrives, people all over the countryside and from the cities come to hold revels on Mount Cithaeron in his honor. Pentheus mocks the god and says it would be better to die fighting Bacchus than to honor him:

“It may be Thebes‘s fate not to live  too long;
For my part I would see War and its armies
destroy her walls, encircle her with flames.
We would be miserable, but honor would be held;
we‘d cry aloud our bitterness, our fate.
But now Thebes is taken by a child, a boy
who does not care to know the arts of war,
Lancers or fighting men, but rather wreaths
of flowers, perfumed hair, purple and gold
stitched dressing gowns.“

Pentheus’s servants capture a priest of Bacchus named Acoetes, who tells him how his crew at sea encountered the child Bacchus. Bacchus demanded to be taken to his home island, Naxos. When the crew refused, Bacchus made grapevines grow around the oars and fill the ship. The men were turned into sea creatures and jumped into the sea, except for Acoetes, who agreed to take the child god to Naxos and entered his service as a priest. (Wikipedia says that they were turned into dolphins, but the translation I have is unclear about that. I wonder what that part is like in other translations.)

Pentheus, after hearing the story, orders Acoetes to be crucified, but the priest escapes. Pentheus goes to Naxos to interrupt the Bacchanalian revels. His mother Agave and his aunt Ino do not recognize him, thinking that he is a boar, and Agave rips his head off. And that’s the end of book III.