Library Loot is a weekly event co-hosted by Claire from The Captive Reader and Linda from Silly Little Mischief that encourages bloggers to share the books they’ve checked out from the library. 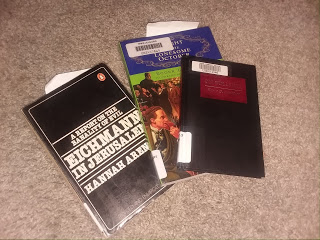 This week (with a quote from the blurb for each book):
Eichmann in Jerusalem
Hannah Arendt covered the Eichmann trial for The New Yorker, where her report first appeared as a series of articles in 1963. For this revised edition of Eichmann in Jerusalem, the author has added further factual material that has come to light since the trial, and a Postscript commenting on the controversy that has arisen over her book.
I plan to read this sometime in the next month, but in case I don’t get to it, I’ll be sure to check it out again in November. This is one of the books I have thought about reading for the Back to the Classics challenge.
A Night in the Lonesome October
Loyally accompanying a mysterious knife-wielding gentleman named Jack on his midnight rounds through the murky streets of London, good dog Snuff is busy helping his master collect the grisly ingredients needed for an unearthly rite that will take place not long after the death of the moon. But Snuff and his master are not alone. All manner of participants, both human and not, are gathering with their ancient tools and their animal familiars in preparation for the dread night. It is brave, devoted Snuff who must calculate the patterns of the Game and keep track of the Players—the witch, the mad monk, the vengeful vicar, the Count who sleeps by day, the Good Doctor and the hulking Experiment Man he fashioned from human body parts, and a wild-card American named Larry Talbot—all the while keeping Things at bay and staying a leap ahead of the Great Detective, who knows quite a bit more than he lets on.
Boldly original and wildly entertaining, A Night in the Lonesome October is a darkly sparkling gem, an amalgam of horror, humor, mystery, and fantasy. First published in 1993, it was Zelazny’s last book prior to his untimely death.
On Bullshit
One of the most salient features of our culture is that there is so much bullshit. Everyone knows this. Each of us contributes his share. But we tend to take the situation for granted. Most people are rather confident of their ability to recognize bullshit and to avoid being taken in by it. So the phenomenon has not aroused much deliberate concern. We have no clear understanding of what bullshit is, why there is so much of it, or what functions it serves. And we lack a conscientiously developed appreciation of what it means to us. In other words, as Harry Frankfurt writes, “we have no theory.”
Frankfurt, one of the world’s most influential moral philosophers, attempts to build such a theory here…

One thought on “Library Loot October 2”